So, last weekend, my friend surprised me by offering to take me to BABSCon on Saturday! For those who don't know, BABSCon is the Bay Area Brony Spectacular, the very first convention for fans of My Little Pony : Friendship is Magic in the Bay Area. I'd never heard of it either until that day, and even though I'm not a brony, I am a huge My Little Pony fan! So I was extremely excited to go!

Because the trip was a little impromptu, and it's been ages since I've been to any sort of convention, my mind was kind of all over the place. But, I did manage to dress up in Lolita for the event! I was hoping to wear my BttsB Unico in Bloomland skirt, but I realized that I don't really have a blouse to wear with it that I like, so I ended up going with one of my favorite OP's instead. I realized after I should have put some pony ears, horns and wings on and I could have gone as Princess Luna! Oh well, maybe next time, for now, onward to the photos I did manage to snag.

Since this trip was pretty on the fly we didn't pre-register and had to get ourselves checked in once we got there. Everyone got a free pamphlet and lanyard with our names on it. I wound up using my OC pony name Twinkling, since I created her based around around what I might be like as a pony.

The vendor's hall! So many people crammed into such tiny space! I was actually surprised at how small the room was, (there was a second room of similar size for the Artist's Alley that I didn't manage to get a photo of), but every inch of available space was completely utilized. I've been out of the loop a bit when it comes to the current generation of ponies, so discovering all of the amazing things people have come up with to sell was pretty amazing. 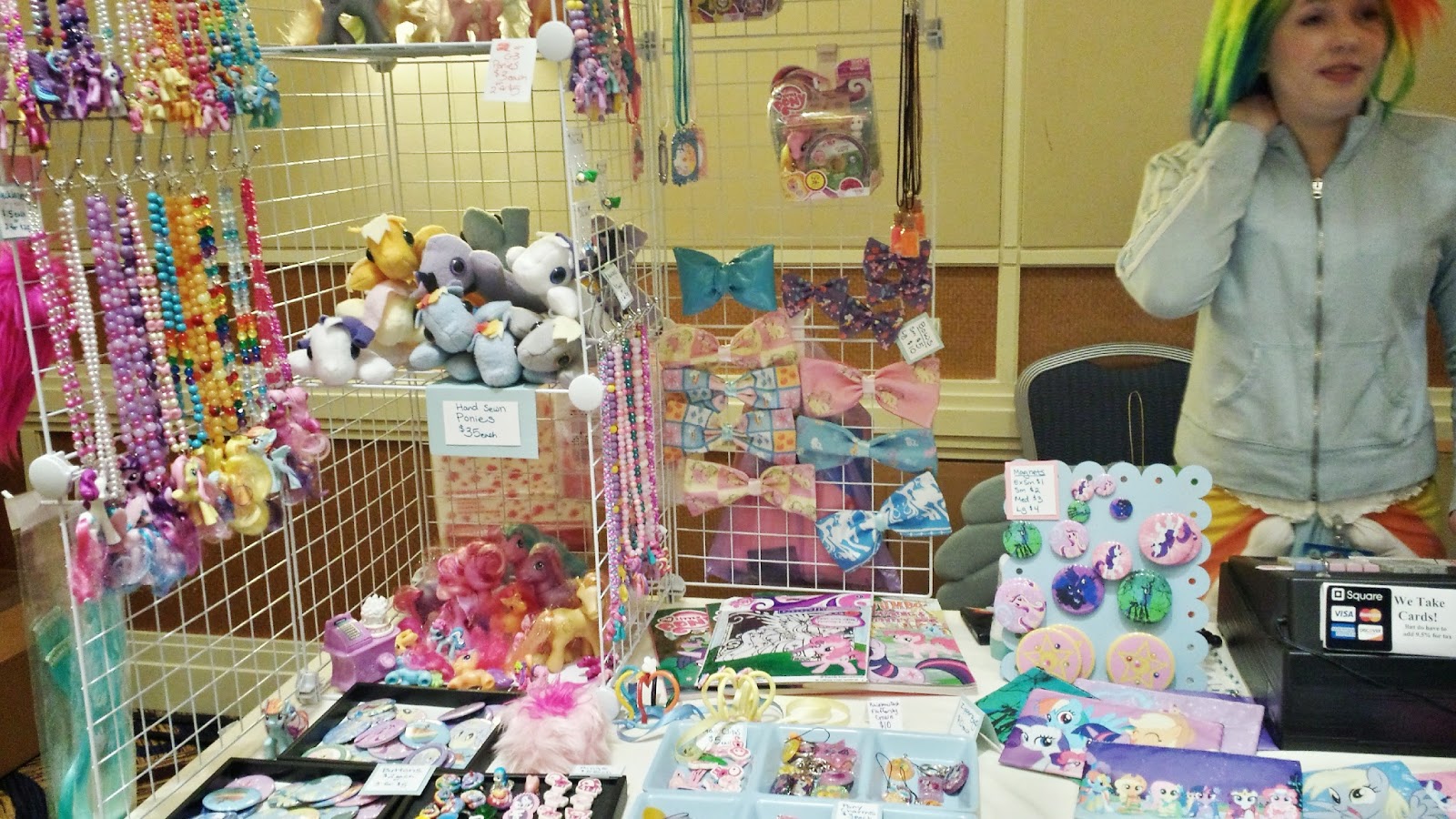 I loved this booth! They had so many cute things, including items that featured classic 80's My Little Pony! I was sorely tempted by some necklaces featuring cameos of the 80's ponies, since they looked like something that would go absolutely perfect with Sweet Lolita or Fairy Kei. Ultimately I chose to pass on them however since they were sadly a bit too sweet for me, especially since I'm trying to curb my wardrobe to a more mature style. However, this booth did have some actual ponies for sale, including ponies from older generations! Look who I managed to snag!

Baby ponies! I adore G3 babies and own all of them except two. There's also an adult pony in there I decided to add to my collection since she was just so pretty I couldn't resist.

This booth was so cute! I love the way the artists set up their display and I wound up purchasing a little charm of Princess Luna from them to give to my little sister as a gift. Unfortunately I don't have any photos of the gifts I got for my family (I also got my older sister a pin of Fluttershy's cutie mark and some pewter unicorns and alicorns for my dad) as I've already handed them out. But as for me, I also managed to pick up these!

Yes! One booth was selling Teenage Mutant Ninja Turtle pins! I was so excited, since if there's one thing I love more than ponies, it's ninja turtles! Not only that, but I loved that they used the artwork from the IDW comics rather than the Nickelodeon show (uh oh, is my geek showing too much?). I was a little sad since the seller didn't have any Mikey pins so I couldn't complete the set, but I couldn't pass up on these three and maybe one day I'll find their long lost brother.

Finally an outfit shot! Here's me and my dear friend who humored me and took me to the con even though he's not really a huge fan of ponies. Though some vendors thought he was cosplaying as Octavia!

A full shot of what I was wearing. This OP is from the indie designer Elegy and it was custom made to my measurements. This used to be a regular item on her online shop, but she seems to have taken it down. Everything else is offbrand (difficult to tell but I'm wearing a black rose-shaped ring, silver stud earrings and a silver necklace with a rocking horse pendant).

Looking back, I wish I had done something a different with my hair. My hair is cut into a very short bob that isn't altogether flatting on me, so I had it up in a teeny bun decorated with white and gray flowers. Perhaps next time I'll keep it down and see if I can't tame it with a hair straightener. I might also wear less, or different jewelry since I'm wearing a silver rocking horse necklace, silver stud earrings and a black, rose shaped ring. I'm still not altogether used to wearing much jewelry so I'm still learning how to tie them into my outfits.

Anyway, had a ton of fun mingling with pony people. It's the first time I've worn Lolita out in awhile, so it was a fun opportunity to dress up. Is anyone else here a pony fan? Or, if you'd like to give me some tips on improving my coord skills I'm all ears!
Posted by Lady Boss at 12:02 PM 0 ink spatters